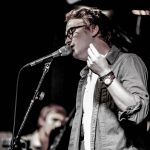 Playing For: I started playing guitar in my early teens, and have been on the gigging circuit for the last 8 years playing in many different setups from solo gigs to jazz quartets, pop bands and acapella choirs.

Musical Education: I started at around 16 with private guitar tuition in the Midlands, joining a local semi-pro big band playing local gigs, then at 18 moved to Cornwall to study on the Jazz program at Truro College. I deferred my course when my singing started to take prominence, and ended up based in Exeter at a music venue called Mama Stones, MD-ing the houseband and honing my stagecraft week in week out. This also helped me learn how to direct a band and take command of any live situation.

Favourite Genre(s): I’m pretty much enjoy listening to everything, but I would have to say that my favourite genres would be Soul, Jazz, R&B. I’ve recently also been getting into my Electronic music too…

Favourite Musician(s): My Favourite musicians who got me into music in the early days and still remain my musical heroes were Stevie Wonder, George Benson, Earth Wind and Fire.. The list is extensive. More recently I’ve been particularly digging artists like Bernhoft, Jamie Woon, Jamie Lidell.. Also this list can keep going and going!

Favourite Musical Moment: I’m lucky to feel I’ve experienced many great musical moments and things I never imagined I would get to do with my music. Playing on BBC and ITV programs and on TV in Germany. Playing in Dubai for Prince Harry’s charity Sentebale, being played on BBC radio to name a few. Singing at Ronnie Scott’s was a massive dream I got to fulfil and hope to go back there again. I have many more exciting projects in the pipeline too, including starting work on my debut album with Lack of Afro.