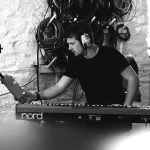 Playing For: I’ve been playing drums from the age of 5, and piano since I was 9.

Musical Education: I learned piano listening to film themes, and started studying jazz when I was 11. I also had drum lessons throughout my teens, getting my grade 8 certificate. I studied GCSE music two years early and went on to study an A level in music technology at Exeter College. I intended to go on to Trinity or Guildhall in London, but instead landed a job touring with a gypsy band around Europe which was the equivalent to a university experience… I learned how to drink with a load of old boys!

Favourite Genre(s): I like everything but I get the most out of jazz, funk and soul. I’m also a fan of classic rock, and any well produced pop.My guiding rod is anything that’s original and comes from the heart.

Favourite Musical Moment: The 2 or 3 times a year when all the factors beyond my control mysteriously come together and the piano keys resemble the matrix code and I can play with no limitation. It makes all the hard work worthwhile.